MESSAGE GIVEN BY OUR LORD & OUR LADY TO

WILLIAM COSTELLIA AT HIS HOME ON FRIDAY

JESUS: When I told MDM I have taken the Keys of the Papacy to Heaven. This was to make it clear the Anti-Pope and Antichrist did not get hold of these Keys – St Peter and St Paul will inaugurate you as the Last Vicar on Earth – Pray to understand the Mysteries surrounding the Last Papacy – Soon a major catastrophe will engulf California, and bring the U.S.A. to its knees – Australia: drought to cause major earthquakes and great devastation – Laws that govern Abortion, Same Sex Marriages and Lawlessness will cause the most damage to this country

WILLIAM: There are three Crosses very high up in the sky and there is a large road, which comes down to us behind the centre Cross. I see it open and Jesus is on a white horse coming down to us. He is flanked by thousand of Angels. A Holy Angel places himself next to Jesus, to let Him come off the horse.

Jesus is all in white, but has on a red sash upon His shoulder that comes to His Side, where He is carrying a sword.

OUR LORD: “I greet you, My beloved son, William John Abraham; I greet all My beloved children of the Remnant Church: In the Name of the Father and of the Son and of the Holy Ghost. Amen.”

“Today I come to explain a Mystery to you and all of My beloved children. Many of Our children do not understand some of the Mysterious Revelations given to Our children, but today I will explain a few things, so that mankind do not get confused, as many of them are asking if you, My son, will be Pope or not and this has become complex, as My children do not know how to discern the Truth from miscalculations – for it has been since the 1970’s, revelations given to some Seers about the Last Vicar of Christ, when the revelation given to MDM that Pope Benedict was the Last Pope, who would be given the Mystery of the Keys of St Peter. Yet there was another Mystical Mystic, namely yourself, claiming to be the Last Vicar, as Pope Peter II, being the Last Vicar for Holy Mother the Church, but it was a Mystery yet to be unfolded.”

“It was for this reason I gave the Keys of the Papacy to you, My little son, so many years ago, which has been made clear throughout the Messages given to you and hundreds of Seers beforehand, so that My children do not get confused as to when I told MDM that I have taken the Keys of the Papacy to Heaven. This was to make it clear that the Anti-Pope and Antichrist did not get hold of these Keys – of which they did not.”

“So let me make it clear to all believers: you, My precious and obedient son are the Last Vicar for My House on Earth and you will wait for My Holy Vicar to go to Heaven, because it will be a time when the Seat of Rome will be laid empty, for the Keys of the Pontificate have been taken to Heaven, but know this, that the Keys of the Papacy remain with you while you remain in exile and it will remain so, until you have gone to Heaven and returned to Earth to take up your Mission as Peter Abraham II, the Final Vicar for Holy Mother Church and it will be St Peter and St Paul who will inaugurate you as the Last Vicar on Earth, until I come in My Second Coming.”

“It will be after the Second Coming that I will make everything clear as to what is to be for holy Mother Church and the Twelve Kingdoms. So please understand, that the Holy Keys of the Papacy have left Earth, back into the Bosom of My Eternal Father, until Rome has been plundered and the Seat of Peter has been restored once again, but it will not be in Rome, so I ask My followers to pray to understand the Mysteries surrounding the Last Papacy.”

“I Bless you, My holy son, the Little White Rock: In the Name of the Father and of the Son and of the Holy Ghost. Amen. There is much for Our children to understand.”

“Today I wish to introduce a devotion to the Eternal Father. It is the Chaplet of Divine Love given to the Eternal Father. It is in preparation for His Triumph, which is close at hand. It is a prayer to save souls who do not wish to know My Father, yet are only in the dark, but with this prayer, millions of souls who are far away from the Father will long to be part of His Kingdom. I Bless this Rosary for the sake of sinful man: In the Name of the Father and of the Son and of the Holy Ghost. Amen.”

“Tomorrow, My sweet children, is the Feast of the Exaltation of the Cross, which will lead up to the Sorrows of My Holy Mother. These Feasts are a prelude of events that will come upon mankind in the short coming years of tribulation. I want My children to think very seriously of their state in life and where they are going. The cross will continue to become heavier as the months and years progress, until the Great Warning comes, because it is not far away. Pray, My dear children – please pray the Holy Rosary and the Mercy Chaplet, as these prayers will lessen the trials you are undergoing.”

“My beloved children, Hong Kong is an example of the forces of evil, which is perpetrated from China. Suddenly, My children will feel the power of the Evil One very soon and they will crush the rebellion, to show the world that China will not tolerate the upheaval in this small Provence and this will lead to the same result occurring in the Island of Taiwan.”

“I ask the children of the West to pray and to realize that the Chinese forces are only exercising their strength, but soon will overflow over all of Asia. I call on India to become alert and to protect its land, because the Chinese invasion of Asia will rock the boat very strongly.”

“Pray dear children for the U.S.A., because it will not be long before a major catastrophe will engulf California, which will bring the U.S.A. to its knees.”

“Pray, My sweet children in Australia, because the drought will cause major earthquakes, which will create great devastation upon the cities. Pray for rain, sweet children, so that the earth remains peaceful.”

“But it is the Laws that govern Abortion, Same Sex Marriages and Lawlessness that will cause the most damage to this country. [It is] because [of] this and many, many sins, that a rich Nation will collapse and find itself wanting.”

“Pray for the Middle East, dear children, because mankind has forgotten its Father in Heaven and because of this, the Nations will go into war. I have asked Our children so often to pray to Our Holy Mother, to ask Her for Divine Help, but the world grows cold and will wait until the earth is struck, then the world will take effect. I, your Jesus, have asked My children to listen to your Holy Mother, because She only asks for a simple prayer.”

Pray for Britain, because the country goes further and further into darkness. Terrorism has not gone, sweet children – also for France and Germany – but Spain will be the target, because My children have not listened enough. Read the Messages of Spain, in Escorial and the Messages given in Barcelona and forget not the Apparition of Garabandal, because the events are near to fulfilment.”

WILLIAM: Our Holy Mother has arrived behind Jesus on a white horse. She is dismounted. She has on this beautiful white garment and also wears a red sash as if to hold a sword. Our Lady greets Our Lord bowing and kissing His Sacred Heart. Jesus holds Our Lady and kisses Her Chest. Our Lady says:

OUR LADY: “I Bless you, My sweet Angel of Divine Love – Little White Rock: In the Name of the Father and of the Son and of the Holy Ghost. Amen.”

“You have listened and heard My Divine Son speaking of how ill the world is – therefore I ask all of My children to pray now, more than ever, because dark days are coming upon the world and My children must pray, so that this darkness leaves very soon, because the Vicar of Christ, though he is on the dark side of salvation, plans to take Holy Mother Church into the darkness by bringing a Synod, to bring forth the division in Holy Mother Church, which will divide the House, which will not be reconciled, as the false peace will come and divide the Church into many parts.”

“My beautiful son, Little rock: be at peace, because many blessings are coming your way. The cross will be lifted for a short while, while you prepare for your Mission. I love you with all of My Heart, as does My Divine Son, Jesus and We Bless you: In the Name of the Father and of the Son and of the Holy Ghost. Amen.”

WILLIAM: Both Jesus and Mary send a kiss.

OUR LADY: “Pray, dear son, as much is coming your way, which will please you very much.”

“The Great Monarch will be in touch very soon. We Bless you: In the Name of the Father and of the Son and of the Holy Ghost. Amen.

WILLIAM: Both Jesus and Mary kiss each other, then make the Sign of the Cross over me and the people.

OUR LADY & OUR LORD: “In the Name of the Father and of the Son and of the Holy Ghost. Amen.”

WILLIAM: There are many, many Angels. Both Jesus and Mary mount Their horses and ride towards the White Cross. As they ride they are Blessing us and roses fall out of Their Hands. 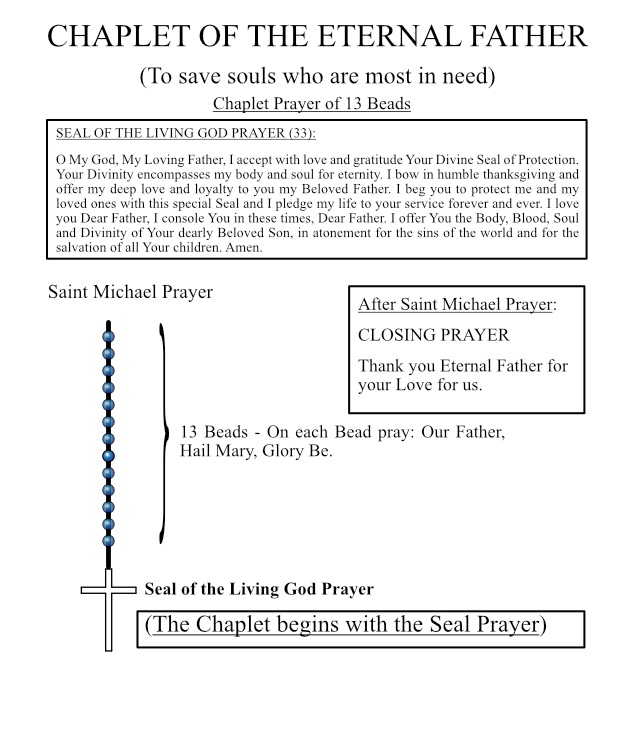